We are planning to mate Echo (Ch Balnakeil An Cearcallach) with Nike (Am/Aus Ch Brodruggan Black Knight) via AI.
We are very excited about this mating, and will post further news once we have confirmation of puppies due.

Unfortunately we were not successful with this mating  which is such a shame but we hope to mate Echo again when she next is in season, which should be April 2013. 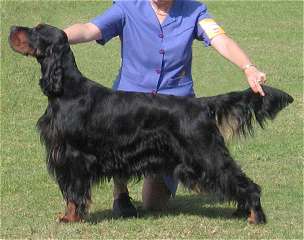 "Nike"
We mated Echo to a grandson of Nike - Triseter Celtic Link with Laurelhach. We were expecting 7 puppies but unfortunately due to various events, we ended up with just one dog puppy, who will be staying with us - Conall, otherwise known as Balnakeil Beinn A' Chroin. 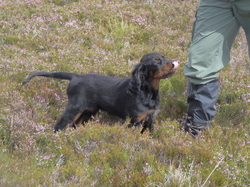 Conall age 12 weeks on a grouse moor. Conall is a wonderful character, full of life and we look forward to showing him and introducing him to the working side! 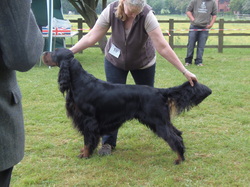 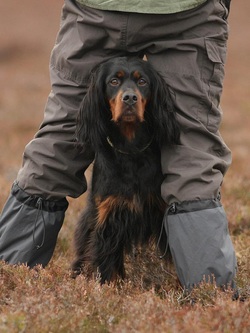 Kai - Balnakeil Carn Na Caim has been mated to Yennadon Carrick and puppies have been confirmed as due 6 January 2014. We are very excited about this litter.
Kai is from British and Swiss/German dual purpose & working lines. She has one RCC in the showring and has her SGWC. She is very biddable and has a very good nose, and is very steady on her birds. 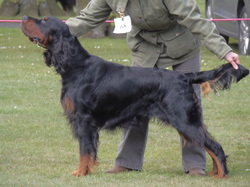 Yennadon Carrick - picture taken May 2012.
Although he is shown, Carrick is an excellent working dog and has one field trial award, as well as his SGWC. He has an excellent nose and it is a joy to watch him work on the moor. 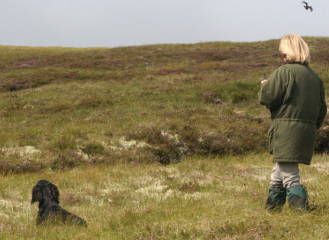 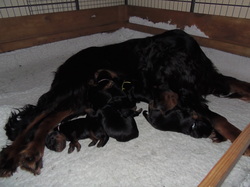 We are delighted to announce the safe arrival of 7 puppies - 3 dogs and 4 bitches, born 5 January 2014
All doing well. Kai is a very attentive mum!
We have 2 dogs and 2 bitches available - genuine enquiries welcome 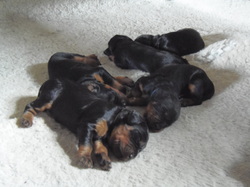 The pups are now just over two weeks old and are now very mobile and eyes are open. First worming completed! More pictures to follow!